Jump to Recipe
5 (3 ratings)
This post may contain affiliate links.

Buckwheat Flour (called kuttu ki roti in Hindi/Urdu) rotis are nutritious, gluten-free and surprisingly pliable. They offer a distinct robust taste and complement many curries very well. They can also be eaten alone or with jam, honey, or anything else roti can be eaten with.

“Thank you. This was recipe was amazing. I’m gf and my hubby is off white carbs. Will definitely make these again.”

Roti, or Chapati, is an unleavened flatbread (or griddle bread) from the South Asian Culture.

Though naan serves as the blank canvas with which we scoop up curries in Indian and Pakistani restaurants, we typically eat rotis at home. Naan is reserved for dinner parties or for serving special dishes such as nihari. (Find my gluten-free naan recipe here.)

Traditionally, rotis are made of a type of whole wheat flour called atta and are cooked on a round, cast-iron griddle, called a tava. Ideally, rotis are only cooked partly on the tava, and then the tava is removed, the roti is flipped and put directly on a flame. The heat puffs it up and cooks the inside as well.

There are plenty of resources and videos online on how to make rotis. I suggest you use the dough attachment of a or other stand-mixer to knead the dough.

But you won’t need to for this recipe. You can easily make the dough in a couple of minutes for these!

Buckwheat flour is nutrient-rich and easier to work with than other gluten-free flours.

Buckwheat rotis are surprisingly pliable and offer a distinct, robust taste that complements many curries well, like my smoked eggplant curry. They can also be eaten alone or with jam, honey, or anything else roti or parathas can be eaten with.

I even had success with them rolled up as a wrap (with a little breakage). 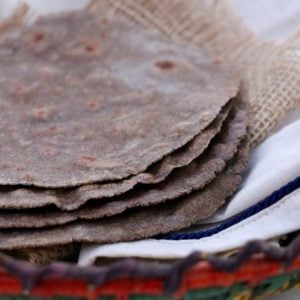 Yield: 6 rotis
Prep Time: 10 mins
Cook Time: 15 mins
Total Time: 25 mins
Buckwheat rotis are nutritious, gluten-free and surprisingly pliable. They offer a distinct robust taste and complement many curries very well. They can also be eaten alone or with jam, honey, or anything else roti can be eaten with.
Print Pin Rate