Jump to Recipe
4.30 (17 ratings)
This post may contain affiliate links.

“Thank you for making my world a better place! I’ve tried gluten free rotis before but none of the recipes were as good as yours so I had given up. Thank you for coming up with this recipe! I feel so much joy that I can eat delicious rotis now! : )”

May is Celiac Disease Awareness Month!

Coincidentally, last May, we became ‘aware’ that my husband had celiac disease.

This meant some changes for us as a family.

There were newfound limitations when eating out. Forgoing birthday cakes became the norm. We read nutritional information like warning labels.

But here’s the biggest change we dealt with:

On a Pakistani dinner table, along with the main dish, you’ll almost always find rice or roti (sometimes both). They are staples. Essentials. You simply can’t do without them unless you’re deviating from the cuisine in some way.

This diagnoses meant half our carb sources were eliminated, leaving us with nothing but rice. If you’re familiar with South Asian cuisine, then you know that some things are just better with roti.

So began my journey with gluten-free roti making.

I’ve experimented making Gluten-Free Flatbreads and discovered several that I liked. Quinoa Flour Roti, for example, is protein-rich, nutritious, and quite pliable but can have a bitter aftertaste. Buckwheat Flour Roti is also packed with protein, but there’s a distinct robust taste of buckwheat.

Truth is – they may be delicious, but don’t taste like “real” rotis.

I first had the idea for this roti while I was out of town. I’ve always loved the wheat-like taste of sorghum flour, but it was usually too tough when used alone. So I thought to combine it with the more pliable, mild-tasting cassava flour.

Trust me when I say I stayed up that night thinking about this combination and how it would taste so much like real rotis.

My theory proved true. After a few experiments upon my return, this roti came out even better than I had imagined.

I did a taste test on my father-in-law, and he couldn’t tell which one was real roti and which was gluten-free. Of course, the texture is different, as always with gluten-free flours. But the taste…you won’t believe it’s gluten-free!

Sorghum flour (called jowar in Pakistan and India) contains protein, iron, and fiber. Cassava flour is low in calories and high in vitamin C. Unlike Tapioca starch, which is the bleached and extracted starch of the cassava root, cassava flour is made from the entire root. So this roti is a healthy day-to-day alternative for anyone seeking a new roti recipe.

So there you have it, friends! My newest and favorite recipe for gluten-free roti. If you try it, be sure to let me know! 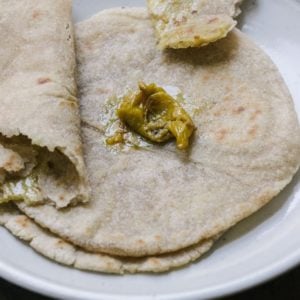