Jump to Recipe Jump to Video
4.91 (10 ratings)
This post may contain affiliate links.

Here’s how to make a creamy bowl of rolled oats (or old-fashioned oats) with milk. Inspired by dalia, a South Asian porridge, this recipe shares how to make oats with milk in the most delicious way. All you need for this stovetop recipe is a (preferably non-stick) saucepan, 3 ingredients, and 20 minutes!

There’s a reason for the dearth of breakfast recipes on my blog. Most mornings, I find myself making parathas, french toast, or this creamy bowl of oatmeal. With kids, these tend to be the easiest, most tantrum-proof breakfasts.

Growing up, we called oatmeal “dalia”, the word for a warming, milky, South Asian-style porridge. Oats weren’t a big part of the agriculture in India and Pakistan, so porridge was usually made with broken barley or wheat. As South Asians spread across the West, naturally, we started to make dalia with the most befitting cereal grain – oats.

Before reading my friend Kathryn’s post on Creamy Oatmeal, I didn’t know Americans usually cook their oatmeal with only water. I thought that’s how they serve oatmeal at hotel breakfasts: soggy and necessitating toppings.

I’ve noticed that all across the world (most recently at Heathrow airport), oatmeal is creamy, milky and actually appetizing. This recipe is inspired by the South Asian method of making porridge, but it’s really just oatmeal made in the most delightful way – with milk.

The Key to Making Oatmeal with Milk

This may seem counterintuitive, but I find the best way to make rolled oats with milk is to still use water while cooking it. Like any other grain, rolled oats need water to penetrate the surface, giving the oats a chance to soften and swell. Using only milk to cook the oats – though still better than using only water – will give you firm, in-tact oats that haven’t broken down as well as they can.

Here’s what you need to make a simple bowl of oatmeal with milk:

How to Make Oats with Milk

The quick summary: First, cook the oats in water, add milk and cook further/reduce. If needed, add a splash of milk before serving to keep it light & runny.

Honestly, before I thought to ‘develop a recipe’ for this, I’d often just cook the oats down in water and add milk without measuring. Once the milk reduced and oatmeal thickened, I’d finish with a splash of milk, which worked just fine. All this is to say – this is not a finicky oatmeal recipe. If you cook it first in water, then in milk for 15-20 minutes, you’ll enjoy wonderfully cooked rolled oats with milk.

Though this oatmeal is delicious enough to not need toppings, they’re never a bad idea. Even good-old dalia was/is often topped with dry fruit or nuts.

Years ago I was inspired by the legendary Local Milk Blog to top oatmeal with caramelized bananas and blanched, slivered almonds and that’s since remained one of my favorite toppings. To make it:

Tips on Making Oats with Milk

How to Store and Reheat 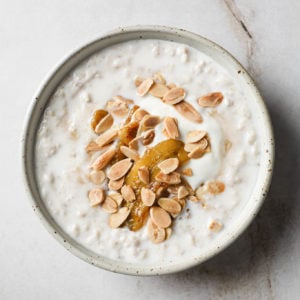 Oatmeal with Milk (How to make Oats with Milk)

Yield: 1 large serving (or 2 small)
Cook Time: 20 mins
Total Time: 20 mins
Here's how to make a perfectly creamy bowl of rolled oats (or old-fashioned oats) with milk. Inspired by Dalia, a South Asian porridge, this recipe shares how to make your oatmeal with milk in the optimal way. All you need is a (preferably non-stick) saucepan, 3 ingredients, and 20 minutes!
Print Pin Rate