Jump to Recipe Jump to Video
5 (33 ratings)
This post may contain affiliate links.

There’s made-from-concentrate, sharply spiced Chai Tea you get from your local coffee shop. And then there’s the authentic version of Spiced Chai (or tea) that we usually call Masala Chai. This easy recipe uses whole spices and tea bags to create a warming, balanced, perfectly spiced cup of Chai. Whatever you’re feeling, this will make it better!

“This is truly the best thing I have drank in a long time. I plan to make it every day now! Thank you so much for the recipe and all the information!”

For many of us, not much thought goes into making Masala Chai. But if you haven’t made it before, there are a few things you want from a recipe. Here’s why you’ll like this one:

What is Masala Chai?

Masala chai (or Spiced Chai) is a traditional Indian tea made with spices, ginger, and milk. Though Masala Chai isn’t as popular in Pakistani culture as it is in Indian culture, growing up as a South Asian in America, I’ve had countless cups. Masala chai elevates a regular cup of chai with spices, making it even more relaxing, calming, and soothing to the senses. This article from Diaspora Co. showcases the history and evolution of Masala Chai.

The word chai simply means tea. You have the simple, milky cup of chai, the characteristically pink Kashmiri chai, and many other popular versions of chai. Masala Chai is distinguished by the use of spices, or masala, in chai.

Yes, Chai Tea is a redundant term. (My friend Kathryn’s PSA on phrases like “Chai Tea” and “Chai-Spiced” explains it best.) But I do think that Chai Tea, initially a rendition on masala chai, has evolved into its own drink. When I think of Chai Tea or Chai Tea Lattes, I think of the coffee shop drink made with concentrated Chai flavor. It’s so different from traditional Indian Masala Chai, that it can safely be categorized as a completely different drink.

Masala Chai is made by simmering the tea with spices and cooking down the milk. This lends it a richer, creamier, more complex taste.

On the other hand, Chai Tea is made with steamed milk and has a more watered down yet sharp flavor (which comes from concentrate or powder). Masala Chai is typically not manually frothed while a Chai Tea Latte is distinctly frothy.

Tea bags, a few spices, milk, and sweetener are all you need to make this soul-soothing cup of chai. As always, if you’re missing a spice or two, don’t let that deter you from making it!

What type of Black Tea to use for Chai

I developed this recipe with tea bags. If you prefer to use tea leaves, you certainly can. But depending on the brand, it may increase the strength of the tea and therefore make the spices more muted. Adjust by reducing tea and/or grinding the spices.

I usually use the whole spices as-is for ease and because I find the long brew time is enough to extract their flavor. But I have tried grinding them and it does slightly increase their pungency.

How to make Masala Chai

Here’s how to make the perfect cup:

How to Aerate Chai

In Pakistan and India, Chai vendors (called chai walah) use a ladle to repeatedly scoop up and pour back the chai. I find this enhances the taste and creaminess.

Often, they’ll expertly pour the chai from a distance into small cups, creating natural, frothy bubbles. (Here’s a video by Travel Thirsty showing a chai vendor in India making masala chai. Toward the end, he aerates the chai by ‘pulling’ it from one cup to the next.)

Upon trying it, I noticed the more narrow the glass, the more frothy it gets (similar to how you need a narrow Turkish Ibrik to create froth on Turkish Coffee). Since most of us don’t have the hand-eye coordination of tea vendors, we can use a milk frother to create a similar effect.

Tips for the perfect cup

How to serve Masala Chai

I love serving any type of milky tea with baked goods, cookies (or biscuits as many South Asians call them), or cake rusk. Since I sweeten Masala chai, it’s perfect as-is. 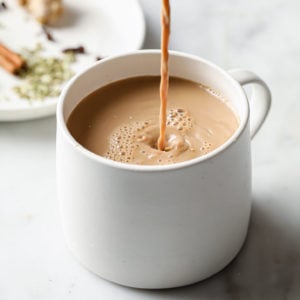 Note 1: What type of Black Tea? Note 2: I usually use the whole spices as-is. For an even stronger, more pronounced flavor of the whole spices, you can roughly crush them using a mortar & pestle or grind them in a spice grinder. It won’t change the taste or throw off the balance of the spices, it’ll just slightly increase their intensity. Note 3: Allowing the milk to boil deepens the flavor and color of the chai. Boiling too long makes it bitter and heavy. The sweet spot (for me) is when the milk to takes on an evaporated, cooked flavor without getting heavy.
Calories: 115kcal, Carbohydrates: 17g, Protein: 4g, Fat: 4g, Saturated Fat: 2g, Polyunsaturated Fat: 1g, Monounsaturated Fat: 1g, Cholesterol: 12mg, Sodium: 80mg, Potassium: 231mg, Fiber: 2g, Sugar: 13g, Vitamin A: 201IU, Vitamin C: 1mg, Calcium: 182mg, Iron: 1mg
Author: Izzah Cheema
Course: Drinks
Cuisine: Indian, Pakistani
Drinks Eid Recipes Gluten-free Indian Recipes One Pot Ramadan Recipes Stovetop Vegetarian 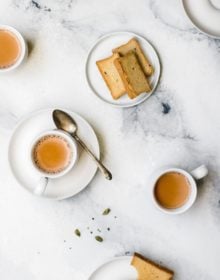 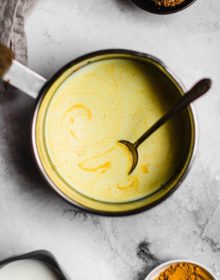