Jump to Recipe
4.95 (19 ratings)
This post may contain affiliate links.

“Amazing recipe. It was my first time making karhi and I was a bit intimidated. Followed the recipe to a T and it turned out amazing! Thank you!”

What is Kadhi Pakora?

Kadhi, or karhi, is a vegetarian yogurt-based curry popular in various forms throughout the Indian subcontinent. In the Punjabi version, chickpea fritters (pakoras) are doused in a hearty yogurt-based gravy and topped with a spice-infused tadka, or tempering.

These pakoras are a little thicker than the usual, crispy, snack pakoras.

What Makes a Good Kadhi

Growing up, I didn’t like kadhi much. My husband would tell me it’s one of his favorite dishes. And I remained perplexed until the day I came across the kadhi that was source of his affection – his mom’s.

Her kadhi set a standard that’s hard to measure up to. It’s rich, yet light, deeply flavorful, and has tender, moist pakoras.

The best part? Her recipe (the one I’m sharing!) is fuss-free and simple to make – the middle ground between grandparent-approved taste and millennial-approved ease.

Mom-in-law’s tip: One common error is adding too much chickpea flour (besan). This causes the chickpea flour to swell and start bubbling, making it appear as though the kadhi has finished cooking. In reality, it requires longer cooking time to make sure the chickpea flour is fully cooked. You’ll know it’s done when there’s no raw taste the oil rises to the top.

How to Make Kadhi Pakora in the Instant Pot

To make kadhi in the Instant Pot:

How to make Kadhi Pakora on the Stovetop

Use a non-stick dutch oven to cook the kadhi. Once the yogurt and chickpea flour mixture comes to a boil (this will take around 12 minutes), lower the heat to medium-low so that the mixture simmers. Keep the lid uncovered, and allow it to simmer for 1 hours and 30 minutes. If you’re making double the quanity, it may take up to 2 hours. Stir occasionally. Then lower the heat to the lowest setting while you prepare the pakoras.

How to create sourness in Kadhi

Kadhi is traditionally made with sour yogurt. I have tried desi-style yogurt from Indian stores, and it does have a subtle sour tang, but I prefer plain whole milk yogurt for this recipe. To compensate for the lack of sourness, I’ve added a bit of lemon juice at the end to enhance the sour taste.

For even more tang, one tip my Mom-in-law gave me is is to add 1-2 tsp vinegar while your kadhi is cooking. If you do this and find it too sour, add 1/4-1/2 tsp sugar to offset the sourness.

What to Serve with Kadhi Pakora

Kadhi Pakora is typically served with plain rice and sometimes naan. If you want to add a protein, I think it would pair great with Shami Kebab.

Update 10/5/22 – The previous recipe made a large batch (8 servings). I tested and updated the recipe with the halved version. It now makes enough for 4, and you can click 2x to double the recipe for 8. The only change necessary was to add more water to account for the quicker evaporation. I adjusted salt accordingly. If you’d like the older version, please let me know and I’ll send it to you! 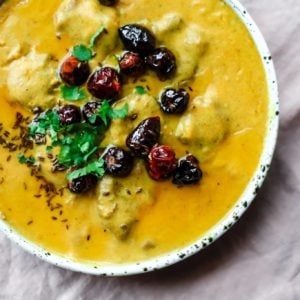