Jump to Recipe Jump to Video
4.96 (21 ratings)
This post may contain affiliate links.

“Amazing recipe. It was my first time making karhi and I was a bit intimidated. Followed the recipe to a T and it turned out amazing! Thank you!”

Kadhi, or Karhi, is a besan (gram flour) and yogurt-based vegetarian stew. In this Punjabi version, vegetable pakoras are doused in the yogurt gravy, serving as delightful little dumplings. Kadhi is almost always finished off with a spice-infused tarka, or tempering, as is often served with basmati rice.

Kadhi isn’t as prolific as other Pakistani or Indian vegetarian curries, but once you’ve had a good Kadhi, it stays with you. It’s all at once earthy and tangy, creamy and bright, warming and light. Pure Desi comfort food.

Growing up, I didn’t care much for Kadhi. My husband would tell me it’s one of his favorite dishes. And I remained perplexed until the day I came across the source of his affection – his mom’s.

Her Kadhi opened my eyes to what Kadhi could be. It was rich yet light, deeply flavorful, and had tender, moist pakoras.

The best part? Her recipe (the one I’m sharing!) happened to be fuss-free and simple to make; the middle ground between grandparent-approved taste and millennial-approved ease.

What Makes a Great Kadhi

When I first shared this Kadhi recipe several years ago, I knew my mom-in-law’s recipe tasted exceptional, but I didn’t know why. Since then, as I reworked the recipe to make a smaller batch (my mom-in-law has 5 sons!), I learned what made it special:

Here are notes on some of the ingredients:

How to Make Kadhi – Read for Tips!

The full recipe can be found on the recipe card, but here are a few tips that may help:

Mom-in-law’s tip: As the Kadhi thickens (indicated by the besan swelling and the gravy bubbling), it may appear as though the Kadhi has finished cooking. In reality, it requires a much longer cooking time to fully cook the besan. You’ll know it’s done when there’s no raw taste the oil rises to the top.

Consistency tip: If it gets too thick while simmering, add water. You want the Kadhi to have plenty of liquid before adding the pakoras. Otherwise, if the sauce is too thick, the pakoras won’t be able to soak it up.

How to Create Sourness in Kadhi

What to Serve with Kadhi Pakora

Kadhi is typically served with plain basmati rice and sometimes naan. These days, I’ve been leaning toward eating it with roti. That way, I can scoop up more Kadhi, and its flavors can be more concentrated in each bite.

Pairing Suggestion: To bulk up the spread or add protein, I think it would pair great with a kebab like Shami Kebab.

Kadhi varies greatly from region to region, and even family to family. Here are some of the common variations I hope to try: 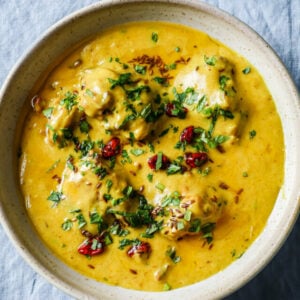 After Cooking the Kadhi