Jump to Recipe Jump to Video
5 (7 ratings)
This post may contain affiliate links.

Presenting a classic Yakhni Chicken Pulao recipe that’s truly hard to mess up! This recipe promises deep flavor, tender chicken, and fluffy rice. It’s also easy to double so you can serve it to guests with confidence. Tested to perfection!

Slowly but lovingly, I’ve been chipping away at this Chicken Pulao recipe for years. Pulao, a delicately spiced rice dish, is a tad behind (truthfully, very far behind) biryani in popularity. A Houston restaurant owner once told me he’d have to throw out the Pulao every night because nobody would pick it over biryani.

But it’s close to my heart nonetheless. Growing up in a Punjabi household meant that Pulao was on the table much more frequently.

These days, I often make it for guests when I need a festive, yet simple main dish that pairs well with just about everything.

Survey Results
I sent out a Pulao survey to my email list and the results were surprising:

Yakhni just means broth or stock. So Yakhni Pulao is made by simmering bone-in meat to create a broth, which is then used to cook the rice.

Without Yakhni, Pulao is a one-pot meal cooked in aromatics, protein or vegetables, whole spices, and water. Examples include Matar Pulao, Chana Pulao or Instant Pot Chicken Pulao (which, by the way, is a wonderful weeknight stand-in for this more immersive Yakhni Pulao recipe.)

But, dare I say the better way to make pulao is to make it with a proper Yakhni. Which, yes, takes an extra 25 minutes or so. But that’s a small price to pay for the depth of flavor the broth etches into each bite.

As long as you have your whole spices in tow, Pulao requires simple ingredients:

The first thing you’ll do, and I find this the easiest part, is make the stock. Just throw in all stock ingredients and allow it to gently simmer away until the chicken is cooked.

How to Cook the Chicken Perfectly

How to Cook the Rice Perfectly

To start, you want to ensure basic rice essentials such as gently washing the rice until the water runs clear and soaking according to the recipe. For the pot, I’ve found a non-stick Dutch oven (5.5 quart) to be the best at preventing the rice from sticking to the bottom. Once all this is in place, here are a few tips to ensure perfect rice, every time.

Pulao is generally made by simmering the rice until most of the water has absorbed or evaporated, and then turning the heat down for a final steam, or dum.

How to Steam (Dum)

What to Serve with Pulao

How to Double the Recipe

This recipe is perfect for doubling because a double quantity uses a whole, 2.5 lb chicken and feeds a crowd (8-12 people). I actually developed this recipe in its double form because I’d always test it when I had guests coming. 😇 Here’s how to do it: 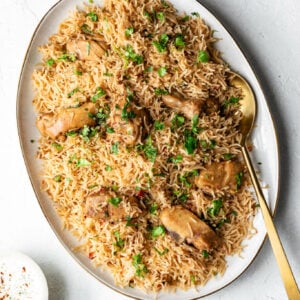 Note 1 – This water will make the broth that’ll be used to cook your rice. Exactly how much you need depends on your rice: Note 2 – Tomatoes: About 70% of survey respondents said they don’t prefer tomatoes in pulao, so I kept the tomato optional. (Though I personally love the vibrance they add.) Note 3 – If you have time, allow the broth to rest to develop the flavors. May be stored up to 48 hours in the fridge. Allow to come to room temperature before using. Instant Pot Method: Here’s how to prepare the broth/cook the chicken in the Instant Pot – Add all of the ingredients listed under ‘Broth (Yakhni)’ to the Instant Pot (no change in water quantity). Pressure cook on High Pressure for 8 minutes. Allow to naturally pressure release for at least 5 minutes, then proceed with the recipe. Double: I’ve made the recipe easy to double for 2.5 lbs, or a whole, cut-up small-sized chicken. Here’s how to do it:
Serving: 4g, Calories: 636kcal, Carbohydrates: 66g, Protein: 20g, Fat: 33g, Saturated Fat: 10g, Polyunsaturated Fat: 5g, Monounsaturated Fat: 17g, Trans Fat: 0.1g, Cholesterol: 71mg, Sodium: 1527mg, Potassium: 398mg, Fiber: 4g, Sugar: 2g, Vitamin A: 252IU, Vitamin C: 6mg, Calcium: 111mg, Iron: 4mg
Author: Izzah Cheema
Course: Main Course
Cuisine: Indian, Pakistani
Chicken Main Dishes Eid Recipes Gluten-free Indian Recipes Main Dishes Pakistani Recipes Punjabi Recipes Ramadan Recipes Rice Stovetop 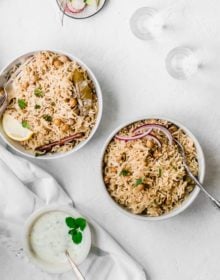 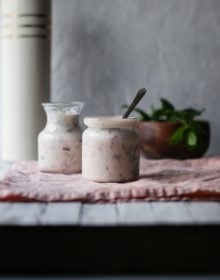