Jump to Recipe Jump to Video
5 (24 ratings)
This post may contain affiliate links.

Instead of hours over the stove, this easy, one-pot Kashmiri Chai recipe takes less than 20 minutes to make! This is not a traditional Noon Chai recipe, but an accessible version that’s still delicious (and pink)! See notes on how to make it with regular green tea leaves if you can’t find Kashmiri tea leaves.

“Thank you so much for sharing this recipe. Finally a recipe that is fool proof and that actually works. I have tried so many recipes and just gave up on pink tea. I saw your recipe today and decided to give it one last try and viola!”

To me, Kashmiri Chai has always been a bit of an enigma. An aspirational, meticulously prepared drink that requires hours of attention, tea leaves from a particular region, a bicep workout, and a good dose of patience. And only then will it be the correct shade of pink…possibly.

But what about us common folk who adore it, but don’t have the due diligence and expertise to make it the authentic way? What if we want a good cup of pink tea, preferably now? Well that’s where this recipe comes in.

What is Kashmiri Chai (Pink Tea) and what makes it special?

Kashmiris don’t actually call their chai “Kashmiri Chai”. That’s the term used by Pakistanis and Indians to describe the Kashmiri Noon Chai (translated to Salt Tea). As the name suggests, Noon chai is a salty drink, but has gained popularity across Pakistan as a sweet concoction.

Often called Pink Tea, Kashmiri chai is a milk tea characterized by its dusty pink color and garnishing of crushed nuts. It’s brewed with green tea leaves and baking soda, and then mixed with milk to give it a distinct pink color.

Even within Pakistan, Kashmiri Chai is a bit of a delicacy because of the long, somewhat arduous process of making it.

How I developed this recipe

To be honest, I felt a bit of imposter syndrome while developing this recipe. Because 1) I’m not Kashmiri and didn’t actually grow up in Pakistan, where it’s a treat often served at winter weddings. And 2) I didn’t want to downplay the art of making an authentic cup of Kashmiri chai. Here’s a Kashmiri Tea Connoisseur’s take on this.

But, I did want to make an easy, fool-proof version that’s doable for the majority of us while honoring Kashmir’s beautiful tea culture. So what started as a quick, expectation-free experiment soon became a possibility. And I found myself gleefully preparing it every night, timing myself and obsessing over the shade of pink.

To compare, we tried it at several spots around Houston and noted that this 20-minute version is more pronounced in flavor and aroma without being heavy.

How to make Kashmiri Chai the traditional way

In the traditional method, you prepare a deep pink concentrate (called kahva or kahwa) by boiling and reducing the tea for many hours. You then shock this tea concentrate with cold water and heavily aerate it before combining it with milk and salt to make Noon Chai. Flour and Spice Blog has a wonderful recipe that showcases this Pakistani style of making Kashmiri chai.

This 20-minute version is as easy to make as a good old cup of chai. Simply boil down the tea leaves with baking soda, add cold water, milk, salt, and sugar. Bring to a boil again, and you’re done.

There are a few reasons why this quick version works:

There are 3 main components at play:

I have tried omitting baking soda and brewing and ladling for a couple hours until I maxed out on patience and there was still no pink in sight. So yes, baking soda makes the magic happen.

What to do if your Kashmiri Chai is not turning pink

While testing various teas, I quickly realized that some teas turn pink more easily than others.

The simple solution for this: Add more baking soda. Some tea leaves require double the amount of baking soda to achieve the same ruby color in concentrate.

Here’s a litmus test to see if if the tea concentrate (kahwa) has turned pink enough:

After adding the cold water, take a small amount out and put it in a cup. Add a bit of half and half or milk. If it’s not pink enough, then add a bit more baking soda and bring to a boil again.

Can you use any Green Tea leaves to make Kashmiri Chai?

Yes! Kashmiri tea leaves are hard to find (even for me and I have access to plenty of Indian/Pakistani grocery stores). So feel free to use any green tea as long as it’s not bitter.

Depending on the variety, non-Kashmiri green tea leaves may not turn as pink as those specifically for Kashmiri Chai. They may also produce a slightly different flavor profile. In the ones I’ve tried, the end product tasted like Kashmiri chai, but was not as pink and had a hint of bubble milk tea flavor. Still very delicious and worth trying with if you can’t find made-in-Kashmir tea leaves.

Fun Fact: My sister tried this recipe by cutting open green tea bags and she thoroughly enjoyed her (pink!) cup.

Which brand of Kashmiri Tea is best?

Again, actual Kashmiri tea leaves are so inaccessible that I can’t find appropriate links for the most of them. Here are some of the brands I know of:

Kashmiri Chai can take quite a bit of sweetener to be noticeably sweet. I have tried sweetening it using a blend of brown sugar and date syrup as well as pure cane sugar and they all work well.

If you’re using honey to sweeten, add it after you’ve poured into cups.

Some final tips to get the perfect cup

How to serve Kashmiri Chai

Since Kashmiri Chai is so flavorful and almost dessert-like, it’s usually served as-is, piping hot and garnished with crushed nuts. In Kashmir, various types of Kashmiri bread is often eaten alongside Kashmiri Chai. Naan can be a wonderful substitute.

How to make Iced Kashmiri Chai

If you try this recipe, please let me know in the comments below! If you’re on Instagram, please tag me so I can see your pretty pink creations. I love hearing from you! 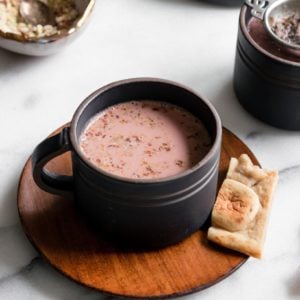